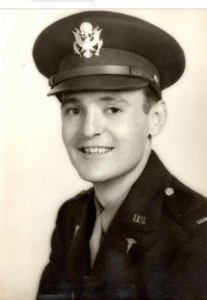 By Josh Kerns – Director of Marketing and Communications
In the iconic film Field of Dreams , Bert Lancaster’s character Archibald “Moonlight” Graham chooses life as a doctor over his desire to play professional baseball. And in the case of longtime pioneering Issaquah physician Ross Grimm, you could say art imitated life.
Grimm, a longtime member of the King County Medical Society, passed away on August 11. He was 100. And there’s no doubt he’ll be remembered by generations of patients.
“My father could have been a pro baseball player. He hit over .400 in semi-pro ball,” his son Ross Grimm Jr. recounted. “He was offered a contract and turned it down saying, ‘There’s no money in baseball.’ And he said ‘This [practicing medicine] is what excites me. This is what wakes me up every morning.’”
Grimm was among the few physicians in what was then rural Issaquah and East King County in the late 40’s and early 50’s. He began practicing there in 1947 after returning home from a stint in the Army, caring for soldiers in the waning days of World War II after graduating from St. Louis University Medical School and completing his residency.
“He was the good old-fashioned country doctor with the little black bag making house calls,” Grimm Jr. says. “He never turned anyone away and I can remember far too many nights he would get woken up and run out to deliver a baby.”
Many others remember it as well. Dr. Grimm is credited with delivering over 3500 babies on the Eastside during his illustrious career. Dozens of them shared their memories, gratitude and condolences on a recent Facebook post announcing his death:
The accolades go on. His son says that legacy is what he was most proud of, even if his patients only paid two bucks a pop.
“I remember he charged $2 for a house call,” Grimm Jr. laughs. “But he would never turn anyone anyway. And if they didn’t have any money, they would just barter.”
Grimm Jr. remembers one patient paying for services by bringing over his bulldozer and clearing land and building a driveway for Grimm’s new home. Others would regularly pay in farm animals, mostly pigs and chickens.
“But the worst was one patient paid with a flock of geese. Dad just threw them in the back yard. They were the meanest damn things. You couldn’t even go in the back yard because those things would attack you,” Grimm Jr. remembers less than fondly.
Only one family refused to pay. It was a pair of spinster sisters who trekked far from the Cascade foothills to summon the doctor in the middle of the night to care for their ailing brother. By the time Dr. Grimm got to their remote cabin with no electricity or running water, their brother had died, Grimm Jr. recalls. When he sent the $2 bill, they rejected it.
“They said they shouldn’t have to pay since he was already dead,” Grimm Jr. laughs.
Grimm would leave the rural, traveling practice behind in 1954 when he set up shop in Renton across from then Valley General Hospital.
“He was listed in the phone book as a surgeon and obstetrician, but if you asked him back then he’d say ‘I specialize in the skin and its contents’,” Grimm Jr. says.
Grimm practiced for decades, selling his practice when he was in his 70’s. But he continued to care for patients for years after, filling in for area physicians at neighborhood clinics when they’d need time off. “He finally hung up his stethoscope when he was around 80,” Grimm Jr. says.
“Trying to recap 100 years in a conversation is pretty tough,” Grimm Jr. says of trying to recount his father’s illustrious life and legacy. But seeing the outpouring of remembrances, he’s got plenty of help.
Dr. Ross Grimm is survived by his son Ross Jr. and daughters Becky and Kate, and numerous grand kids.
The King County Medical Society is proud to call him one of ours, and we send our heartfelt condolences to his family.
If you’d like to make a donation to the King County Medical Society Community Foundation in the name of Dr. Ross Grimm (or anyone else), please visit our new Community Foundation page to learn how your contribution can help the next generation of aspiring physicians.
By Nancy Belcher|2018-10-04T15:52:02-07:00October 4th, 2018|Uncategorized|Comments Off on In Memorium: Remembering Issaquah’s country doctor Ross Grimm