Guest Post: CPR – Can We Do A Better Job? 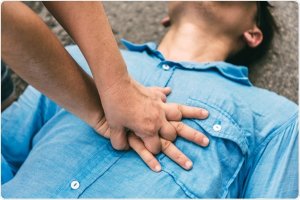 The basics of Cardio Pulmonary Resuscitation are known across the world. It has been a boon to victims of cardiac arrest by lengthening the four minute window of opportunity available in which to restore normal sinus rhythm. However, we could do a better job. This is evidenced by the distressing number of survivors who have varying degrees of permanent brain damage. Chest compression is just not very effective in producing a cardiac output. There may be an explanation for this that has escaped notice. Those in cardiac arrest may have lost all autonomic physiologic control, including the all-important control of venous tone. Venous tone is never measured, so it’s no wonder we have had little appreciation of its importance. We frequently measure venous pressure, but this reveals the mean right atrial pressure only and says little or nothing about the status of venous tone.

Over 75 years ago someone at the NIH threaded a double balloon catheter into a subject’s arm vein. Recording from this isolated segment revealed venous tone for the first and only time. This experiment proved that the smooth muscle lining of all veins is under delicate autonomic control. We tend to notice this control only when it is at its extremes, either maximal or when it’s absent entirely. It’s maximal in the patient who has lost a lot of blood. Veins usually visible under the skin become contracted, almost invisible threads. Venous tone is chronically absent in patients with idiopathic autonomic insufficiency. They can’t sweat, their pulse rate is stuck at sixty, and they are unable to stand up without fainting.

Venous tone is acutely absent in those with vasovagal syncope. Once, when I was a medical student at the University of Washington in the fifties, I was measuring a patient’s venous pressure when the saline column suddenly dropped to zero. The patient insisted he felt fine but over but the next 10 seconds he became progressively pale, and fainted. Blood flow back into the chest had all but stopped. Each cardiac stroke became less and less until the liter-a-minute blood flow to the brain necessary for consciousness was no longer present. A few days later as I was measuring a patient’s spinal fluid pressure, it too also suddenly fell to zero. Realizing what was happening, I stopped the procedure, rolled him onto his back and lifted his legs, preventing the faint that was underway.

I suspect that those in cardiac arrest also have no autonomic control of venous tone. The resultant lack of a decent central blood volume would explain the poor stroke volume with chest compression.

A few years later when I was Cardiology Fellow, I reviewed all the indicator dilution studies performed by the late Dr. Robert Bruce, the head of our Department of Cardiology. These were performed by injecting Evan’s Blue dye (T-1824) into an arm vein and recording from an oxymeter on the ear lobe. These curves revealed the cardiac output, intra-cardiac shunts, the total blood volume and the central blood volume— the blood in the chest. It was soon apparent that the central blood volume and the cardiac stroke volume were always closely related. This suggested that the heart pumps what is “handed” to it, the central blood volume, which in turn is determined by the status of venous tone. Veins contain four-fifths of our blood volume. Here is the answer to the question, ”how does the body regulate its cardiac output?” The key here is the venous tone, the overlooked physiology.

When it was observed that those poisoned by carbon monoxide have high cardiac outputs, it suggested that the body monitors oxygen delivery. When it falls short, it is interpreted as a need for more blood flow. The autonomic-venous tone reflex leads to an increase in the central blood volume and the cardiac output rises. The overlooked physiology of venous tone may also explain the mystery of high-altitude pulmonary edema. The partial pressure of oxygen at 20,000 feet is half of what it is at sea level. This would trigger the call for more cardiac output. Most physically fit climbers can probably handle this without much difficulty. But if a climber’s fitness included an element of left ventricular hypertrophy, volume loads are poorly tolerated and pulmonary edema could occur. Word is spreading among mountain climbing circles that a beta-blocker may be helpful when climbing at high altitudes, although it is not known why. This neglected physiology of venous tone may be the key.

If the subject of a cardiac arrest has no venous tone and a poor central blood volume, what can be done? Forty years ago, a patient suffered a cardiac arrest in the X-ray department of Seattle’s Providence Hospital. I was nearby and started CPR while the defibrillator was mobilized. After about thirty seconds the patient opened his eyes, looked up at me and said, “What the hell do you think you’re doing?” I stopped doing CPR, and in a couple of seconds he was unconscious again. After defibrillation, his rhythm was restored, and it wasn’t until several years later that I realized how rare it was to wake a patient up before they are shocked. In fact, I haven’t heard of another example. What was I doing that was so effective? I was sitting on him. He was on an elevated table and it was easiest to climb up and sit on his stomach to do the chest compression. This might have been helpful in several ways. It would compress the flaccid aorta against the lumbar spine so any cardiac output wouldn’t be wasted down the legs. It would stabilize the diaphragm so chest compression would generate a higher intrathoracic pressure, the pressure that squeezes the heart, instead of just pushing down the diaphragm. And it would also push blood pooled in the abdomen into the chest where it could become available.

If it is available, epinephrine should be given. It restores venous tone where it is absent. This could be its major contribution. If there are bystanders, you might have them lift the patient’s arms and legs to encourage passive blood flow back into the chest. While we all continue to search for ways to improve CPR, the aforementioned are some ideas that might prove to be helpful.

Kenneth M. Eyer M.D. is a retired cardiologist who practiced for 25 years at the Minor and James Clinic and the Providence Heart Center.  He was also a full Professor of Clinical Medicine at the University of Washington.  He has been an honored member of the King County Medical Society since 1960.